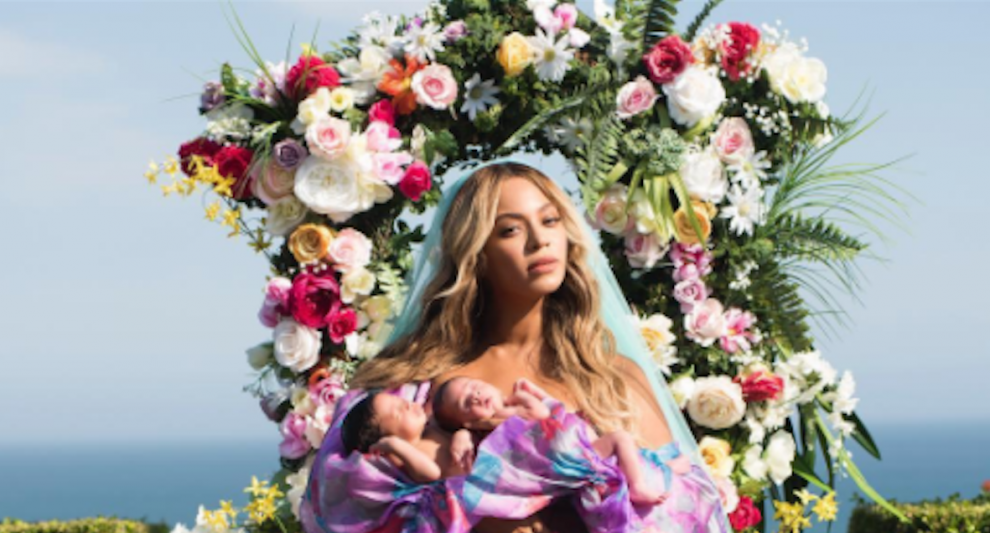 Beyoncé Reveals the Names of the Twins, Sir Carter and Rumi, Who Have Come To Save Us All

The half of 2017 has been looking like the gods had lit the world on fire and walked away, just like Angela Bassett leaving behind that car in How Stella Got Her Groove Back. But, thank hot sauce, Beyoncé announced via Instagram that the gods have not forsaken us, and we have proof because 1) she was draped in floral fabric, standing before an altar of flowers and 2) Beyoncé was holding her newborn twins. Beyoncé did not just reveal her progeny, she revealed that she is, as always, a true hero of the people.

What does Beyoncé’s double blessing mean for our collective cosmic energy? Well, first, these are not be just any old twins. No, we must look back to the ancient mythology. Goddess born, these twins will be like Apollo the sun god and Artemis the moon goddess. Together with Beyoncé, Jay-Z and Blue Ivy, the family will be quite literally, our sun, and moon and stars.


Their names: Sir Carter, meaning master, gentleman, a man of authority; and Rumi, the name of a 13th century mystic poet, also meaning lapis lazuli, is perhaps a nod to big sister Blue Ivy. I can’t help but note that these babies come after both Beyoncé and Jay-Z have used their marital troubles in their art, and perhaps the name Rumi harkens to a new phase in their life. Here is a Rumi quote that supports this:

Let yourself be silently drawn by the stronger pull of what you really love.
The wound is the place where the Light enters you.
Don’t grieve. Anything you lose comes round in another form.

Anything you lose? Like the innocence of a new marriage, of a family untested? But enough of troubles! There are babies to be celebrated! Out of the trash-fire of Trump era comes a new way!

We are living in a post-Lemonade era; these twins came out of the womb swinging baseball bats, wearing Cavalli, ready to rule a world that has already bowed down, bitches. Incubated in feminism and civil rights, they are twins forged in torchlight who will lead us out of the smoking ruins of our humanity into a new day, filled with decency, kindness, fierce fashion, and absolutely and completely devoid of f*cks. The soles of their feet are padded with the shattered glass of the patriarchy’s last stand. Their tiny fists will crush oppression like it is breadcrumbs. In the folds of their thigh rolls, we will find omens of deliverance and salvation.

Or, maybe they will just be regular old babies, and we still won’t even notice because OMG WE TOTALLY NEEDED SOME GOOD NEWS AND BEYBIES ARE DOUBLE SUPER BABIES WHEEEEEEEE!!!!!!!

Take this blessing to heart. What double joys are incubating in you? What powerful secrets are you pushing forth in to the world? How can you be a light in the world? Drape yourself in veils, friends. Hold tight to the belly’s creations. A new dawn is blooming.