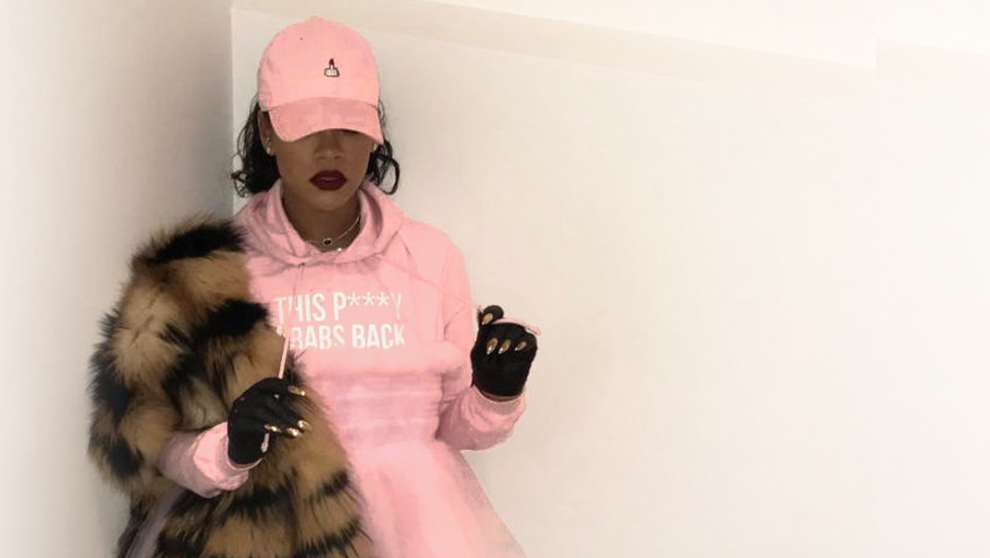 True Story: Rihanna protested at Trump Tower during the Women’s March NYC and I have the video to prove it!

Were you at the Women’s March? I was there, right next to Rihanna! It was so VIP that Mashable interviewed me about it right away, but I saved the real story for you! And, I even have VIDEO!!!!

First of all, I was a little late to the Women’s March, because I was on a plane for most of the day, returning from my vacation in Australia. I thought maybe I was too late to join the Women’s March, but it turns out I was only fashionably late. Phew! I dropped off my suitcase at my apartment, and put on every pink thing I own. Actually, everything I own was pink so I didn’t need to change, I just added pink earmuffs in place of a pussyhat. I headed up to Grand Central, but the barricades had been removed and it was clear the march had moved uptown. No matter, I marched myself up Fifth Avenue until I found a group of women wearing pussyhats and waving signs. “Can I march with you?,” I asked. “Sure,” they said. “Follow us to Trump Tower!”

Our motley fuschia crew arrived down the block from Trump Tower, where the NYPD let us enter the barricaded area where the rest of the protesters were standing. We jumped right into the sign-waving and chanting. Cars sped by us down Fifth Avenue, and whenever passengers waved at us we cheered back at them. For a protest, this was way more like a party.

And that’s when the real party began. I was in the second row of protesters and noticed two burly men begin to part the crowd. I figured there might be a politician in the crowd, but it was even better. I noticed a bright pink hat and fur stole on a woman behind the burly men and when she turned her face, I realized OMG RIHANNA IS HERE. FOR REAL, RIHANNA IS PROTESTING WITH THE PEOPLE. Celebrities really are just like us!

I have never been so jealous of a “protest chic” outfit. Rihanna was dressed like this was the protest part of the year in a pink tutu, pink hat, pink hoodie that said, “This p***y grabs back,” wide-leg jeans and pink heels. She finished off the look with black leather gloves with gold metal talons, and a fur stole. If that doesn’t say “Girls Rule the World,” what does????

I was right behind the Bodyguard #2 (who smelled really good and was very handsome, btw), so I had an excellent view. What was coolest was the way Rihanna joined the crowd, and even though we were all aware of her, she was really one of us. She joined all our chants, and danced and dabbed to the beat of the protests. One of her crew even carried a pink sign that said “Truth Matters.” Rihanna read everyone’s signs around her, and laughed and cheered on the funny slogans and drawings. A bunch of paparazzi crossed the street to take pictures of her, and Rihanna just kept dancing. Democracy is totally fun! Exercising our rights can be a joyful night out, just like at the club! Rihanna was a pink Spirit of Patriotism, showing us all that we can dance together, and we can march together. What unites us is our belief in human rights, and our power as people.

she’s the realest of the real, and she knows how we feel! @rihanna pic.twitter.com/totpVfqA19

I think though, that my favorite moment was just before Rihanna left. The crowd switched from chanting, “Our body, our choice,” to “Black Lives Matter.” Bodyguard #2’s face lit up. He went from watching the crowd like, “It’s my job to watch Rihanna’s back at this girl thing” to chanting with us. That’s when he got that this march was more than one group’s self-interest, but about bringing people together who believe in equality, period. The march was just as much for him as it was for me, as much for Rihanna as it was for the baby-faced emo guy in a leather jacket behind us. We were just people who wanted to have our voices heard, and we were okay wearing pink and dabbing while we did it.

After about an hour, Rihanna’s bodyguards led her out of the crowd. She waved at all of us and wished us well, weaving her way out of the crowd the same way you’d exit a dance floor. We kept on chanting…and then totally freaked out and texted all of our friends, “OMG I JUST PROTESTED NEXT TO RIHANNA!!!!!”

At least we kept it cool for a little while.

The time I got off a plane from Australia, headed to Trump Tower & ended up protesting next to @rihanna. #WMNYC #WomensMarch #Rihanna pic.twitter.com/rqeJmU590X

Did you go to the Women’s March? Would you wear a tutu to a protest? Have you ever engaged in political action next to a celebrity? Tell us in the comments!