What is Netflix’s new Tidelands Show About?

Tidelands is Netflix’s first Australian original. It follows the formerly incarcerated Cal (played by Charlotte Best) who returns home after years away only to unravel her hometown’s biggest mystery. She’s from Orphelin Bay, where a strange hamlet of people called the “Tidelanders” peak her interest.

The trailer opens with a legend that might sound familiar. “And with the water came angels of death, hideous and cruel,” Bill (Peter O’Brien) tells Cal. “And by their pale hands, many men perished.”

Elsa Pataky (The Fast and the Furious) plays the leader of the Tidelanders, Adrielle, who assumes the role of “queen” in the absence of a designated leader. This suggests that perhaps Cal, who might be a Tidelander herself, is a rising queen.

Upon viewing the first episode, Tidelands appears to be a sexy, watery thriller with plenty of plot twists. It’s much grittier than other mermaid shows. Will it find a fan base in mermaid fans or thriller fans? Only the tides will tell. 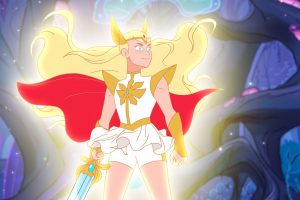 Laura von Holt is the Fairy Boss Mother of Cinderly. Her goal in life is to lead the first fairy godmother empire, be the Lisa Frank of the Digital World, and make magic real for sparkle unicorns and boss ladies everywhere. A triple threat, Laura is a Pulitzer Prize contender, a Certified Fairyologist and a graduate of Weeki Wachee Sirens of the Deep mermaid camp.