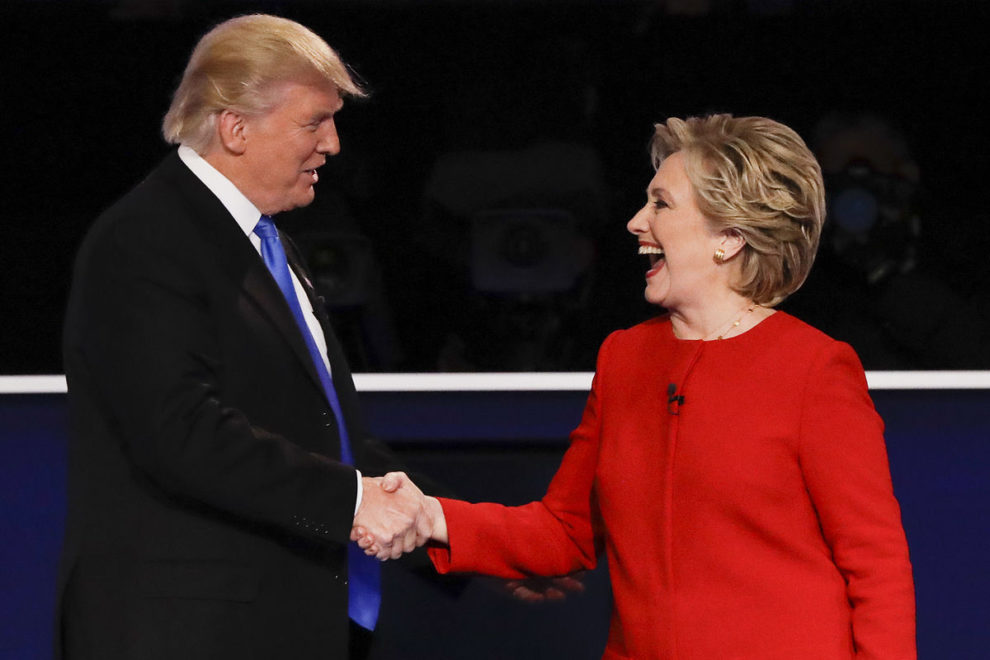 Hillary Clinton, Donald Trump and The Presidential Debate: If You Want To Talk About Stamina, The Divine Feminine Has Been Waiting A Few Millenia For This Moment

Welcome to Starscopes, wherein Cinderly’s Fairy Boss Mother interprets the movements of the stars and other celebrities and what it means for your personal horoscope.

According to Americans, the world, perhaps the whole Universe, revolves around our section of the North American continent. This means that the upcoming presidential election has many of us feeling anxious about not only the next four years, but the ENTIRE DESTINY OF THE KNOWN UNIVERSE. Come, ye children of this great nation, snuggle your stars and stripes deep into my authoritative, glittered bosom, and let my thundering heartbeat deliver this energy report on how the presidential election really affects the cosmos, and us all.

When we align ourselves with a political body, we want that body to rule. Just as our astrological charts can be clues to our real selves, our political alliances are reflections of how we wish our world to be ordered.

And yet, a presidential election reminds us that there is no apparent order to the Universe. All is chaos.

What is a debate but an attempt to disprove chaos, an attempt to prove that picking one ruling body over the other is the only real way to avoid chaos? Elections also remind of us our impending mortality. As a nation, we live in four-year cycles, and there’s only so many of them we live to see.

Yet I say to you, do not lose hope. Sure, it may be infuriating to watch several agonizing hours where every bit of our future is at stake. We each of us want to believe that our candidate “won” because then we will have won, over our enemies, and over our own mortality. I call to you to see through the smokescreen of mansplaining, interrupting, makeup, lights, pantsuits, fake tans and wigs.

See through to this truth: here before us is a representation of a fundamental dichotomy, the feminine divine alongside the sacred masculine. One energy, in this instance, is full of bluster, assertion, and domination. The other is patient, wise, informed, joyful even. Two regular people enacting an ages old dance of power and balance. Presented before us in this way, it seems we are being asked to choose. Will we go with what we know, male domination, or will we turn towards a new way?

But there is no choice, because this is not an election. This is a cycle. Our world has been tipped towards the sacred masculine for a few millenia. Now, at the dawning of the Age of Aquarius, we are beginning a new cycle. After waiting thousands of years, this is a return to the Divine Feminine. Talk about stamina! Our humanity is turning from violence, oppression and dominance towards wisdom, tolerance and truth. Our planet, and ourselves, cannot sustain what we have wrought. It is time for a new way.

This is why you feel anxious. You are being called by the Universe to come into a new age. You can resist it, or you can surrender. Surrender is an active choice, not a passive one. It says, “I am smart enough to choose change.” When you vote on November 8th, be smart enough to choose change. Surrender, and step with us into an new kind of power. You’ll be coming along for the ride no matter what, so you may as well call shotgun.

If you’re still on the fence, I’ll put it to you this way: Who is always the real boss? Grandma. Grandma is the real boss. Vote for Boss Grandma. You always regret going against Grandma.

p.s. As a Fairy Boss Mother, I will obviously align myself with the presidential candidate most likely to use one of Cinderly’s unicorn stickers in an iMessage. That is why Cinderly, along with our patron saints, Katy Perry and Sia, is proud to endorse Hillary Rodham Clinton for President of the United States.